Chiari malformation (CIM) presents an interesting pathology, affecting both children and adults. It is described as a downward displacement of the cerebellar tonsils through the foramen magnum (Fig 1). This downward displacement of the cerebellar tonsils (more than 5-7mm below the foramen magnum) is the primary cause of signs and symptoms observed. This herniation can be a result of congenital or acquired malformations. There are several theories yet to be proven behind the development of congenital CIM. These include aetiologies such as small posterior fossa, hydrodynamic insults, hindbrain dysgenesis, underdevelopment of the basiocciput, lack of ventricular distention, and genetic causes [1]. Aetiology for acquired CIM may include trauma, craniosynostosis or intracranial mass lesions just to name a few [2].

Many CIMs are discovered incidentally, and have no associated signs or symptoms [3]. The prevalence of asymptomatic CIMs is estimated at 15-37% [4, 5]. The signs and symptoms associated with symptomatic CIM include pain, headache, elevated intracranial pressure, syringomyelia, cranial neuropathies, brainstem compression, cerebellar dysfunction, cervical myelopathy, and sleep related breathing disorders [6]. Syringomyelia is an important pathology related to CIM occurring in 30-70% of cases [7, 8]. It can cause symptoms of sensory changes, scoliosis, and proprioceptive loss.

There are several types of CIM described. Type II CIM involves a herniated cerebellar vermis, brain stem and fourth ventricle, in addition to cerebellar tonsils. This subgroup represents a much smaller proportion of CIM [2]. Type II CIM is almost always associated with myelomeningocoele as well as Klippel-Feil anomalies, and incomplete closure of the posterior arch of the atlas.

The treatment of asymptomatic CIM is largely conservative. Surgical treatment should be considered in patients with associated CIM headache symptoms impacting quality of life, large or enlarging syrinx, or objective abnormal neurological findings or myelopathy. The most common surgical approach is a cranio-cervical decompression. This involves removal of part of the occipital bone extending to foramen magnum, and may also include removal of posterior C1 arch, decompression with arachnoid opening followed by duroplasty (Fig 2&3). Other surgical options include bony decompression alone, of cerebellar tonsil coagulopathy or resection. Fig 2&3. Preoperative and postoperative MRI T2 sagittal cervical spine. 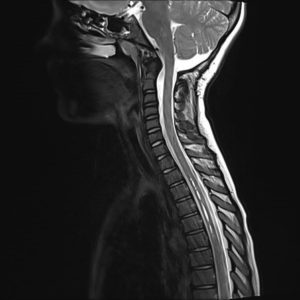 Significant progress has been made in recent years in treatment of Chiari malformations. However this disease remains a curious pathology and there are still many key questions yet to be answered.

Patient and staff safety is our highest priority at Briz Brain & Spine.

For patients with appointments, if you are suffering any symptoms such as fever, dry cough, sore throat, tiredness or shortness of breath or have recently travelled interstate, overseas or been in contact with someone who has returned from interstate or overseas, or have been in contact with a confirmed case of COVID-19, please contact our friendly reception team before attending the clinic. A telehealth appointment may be an alternative method of speaking with our surgeons.

Protecting the health of our staff is vital to ensure they can continue to provide great service.  Patients are encouraged to prepay accounts over the phone prior to appointments or via payWave or other contactless payment methods. Patients are also asked to complete the Patient Details Form and sign the Privacy Policy Agreement electronically prior to their appointment. These forms can be found under our Contacts page on the website or by clicking here. Please note, patients are asked to bring only ONE support person to their appointment and maintain appropriate social distances to help reduce the risk of Covid-19 transmission.

During this current outbreak of Covid-19 coronavirus we want to assure all of our patients that we will continue to implement procedures to maintain a hygienic clinical environment. This includes:

-          Disinfecting and wiping down all treatment surfaces

We are carefully monitoring the directions and advice of Queensland Health, the Australian Government Department of Health and the World Health Organization. In the meantime, it is still business as usual and our doors are open.

Briz Brain & Spine wishes to apologise for the inconvenience caused and thanks you for your cooperation and understanding during this unprecedented situation.